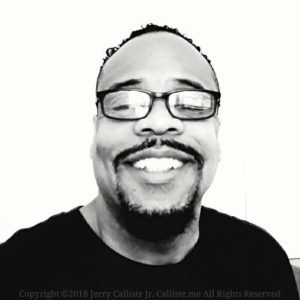 Mr. Calliste Jr. a.k.a. Hashim is an innovative, legendary songwriter and co-producer of arguably the world’s most influential, licensed and sampled Electro Hip-Hop song titled “Al-Naafiysh (The Soul)” or as DJ’s say, “It’s Time”.

Calliste Jr. is born Bronx, New York on 26 November 1965 at Misericordia Hospital and raised in the Bronx on 174th & Macombs off University Ave until his was 5, then North Manhattan Dyckman St. in Inwood/ Washington Heights. Calliste Jr. is also an adopted ‘Buckeye’, he relocated to Columbus, Ohio in 1992. He is well travelled having visited and lived in London, England two times and other foreign countries and U.S. states.

For over 39 years Calliste Jr. participated on board of directors, built successful business teams, supervised over forty interns and professionals, launched popular music companies, created curriculum for two internship programs for twelve accredited U.S. universities and one international university in Lithuania and participated on two influential U.S. political campaigns for President of U.S.A.

Between 1983 through 1988 he founded, launched, and developed entertainment media companies that grew consumer bases, sold approximately 5.0 million units and generated an estimated $25 million in global sales. In events management he partnered venues with top commercial brands and grew sales by 350%.

His peers say he’s “an authority on music marketing, copyright and licensing, independent talent development” and “…a natural at identifying new trends and opportunities related to start-ups and strategic business.”

Prior to co-founding Cutting Records, Calliste Jr. a former DJ and self taught keyboardist who learned to play by ear on a Casio while listening to early original Hip-Hop (’79 -’83) outside jam tapes (original mix tapes) and dance music radio. Created one of the world’s most innovative, influential, widely sampled and licensed Electro and Hip-Hop song’s, of all time. The song is named “Al-Naafiysh (The Soul”) or as most DJ’s say, “Its Time”. He also created additional influential music thus spawning the creation of the music genre “Electro Hip-Hop”.

He received two RIAA Gold awards for 500,000 units sold on each song for Cutting Records recording artist 2 In A Room’s “Wiggle It” and Giant Records Ahmad’s “Back in the Day”.

Commencing in 2006, Calliste Jr. studied dual majors in B.Sc. in Information Technology & B.Sc. in Management Information Sciences at the Ross School of Management and Leadership at Franklin University, located in Columbus, Ohio where he maintained an average 3.75 GPA. He’s fluent in English, speaks some Spanish, Arabic, and Bahasa Indonesia and is learning French and Mandarn Chinese.